From the middle 1800’s to 1932, the town of Frederica was protected from fire by the antique hand pumper now housed in our present building.
In 1932, a group of concerned citizens incorporated the fire company. The first President was John C. Darby and the first Chief was Leslie Rentz. The members purchased a used Seagraves pumper from the Robbin’s Hose Company in Dover as the town’s first motorized piece. Not having a building in which to house the engine, Mr. Rentz allowed the fire company to keep it in a garage at his place of business. Unfortunately (and much to the members’ embarrassment), the garage caught fire later that year and burned to the ground with the truck still inside.

To replace this loss, the members then purchased an open-cab Reo pumper which was in service 1957,  when it was sold to Mr. Hardy Foraker for $250. The Reo was repurchased by Past Chief Paul Davis in 1999. He then donated the truck to Frederica Fire Company in 2000. The REO was completely restored by Eddie Denkenberger 2001-2002. Frank Beebe contributed much to finding missing parts and doing the woodwork required on the truck.

The town was in desperate need of a firehouse to store the equipment of a growing company. However, the country was in the clutches of The Depression and money was very hard to come by. The WPA, Works Progress Administration, was developed to help communities with projects that would give local people employment. The late Banksom T. Holcomb, who resided near Frederica, was the administrator of this program for the State of Delaware. Through the efforts of some of our civic-minded citizens working with Mr. Holcomb, we were able to get assistance for this project. The building was completed in 1936, and was known as the Frederica Community Building with the first floor to be used as a fire house.

The Town of Frederica was bonded for the local share of the cost. Some time later, the firemen started dances which proved quite successful for many years. The Ladies Auxiliary also assisted with suppers, card parties, etc. The Fire Company took on the obligation of paying off the balance of this cost to the town and finally the Town Commissioners deeded the building to the Fire Company.

In order to provide a better water supply to the Fire Company, we purchased a Chevrolet chassis and a thousand-gallon  tank in the early 1940’s. The late Marion Stevenson and Reynolds Gooden, President and Chief respectively, were responsible for the leadership in the members assembling this truck on their own. This truck was sold to the Farmington Fire Company and was still in service in 1982.

In 1960, prior to starting Bingo, the Bradley property behind the Fire House on David Street was torn down, and the then Post Office Building was erected by the Fire Company. The Post office had previously been located in the Fire House where the T.V. room is now located. In July 2001 the Post Office moved to a new building next to the Lake Forest East elementary school. In July 2007 the old post office building was demolished to make room for a new addition to the engine room.

In 1961, a dramatic change took place at the Fire Hall. Through the efforts of Zora Tatman, Bill Schmick, Ben Markowitz and many others, Bingo games were started.  Bradford Holliday and Ernie Creed are original workers who are still working bingo nights to this day. With ample revenue from these games back then, it was not necessary to go door-to-door for fund raising. For several years Bingo made the Fire Company very self-sufficient and there was no need to ask the citizens of our fire district for any out of pocket donations. The firemen were very proud of that fact.

A Dodge brush truck (truck 4) was purchased in 1968 for fighting woods and field fires. Purchase price was $13,000 dollars and it contains a 200 gallon tank, four-wheel drive, a 250 gallon per minute pump, and a 10 ton winch.  The brush truck was repainted by Eddie Denkenberger, and renumbered as 49-0.

The engine for this truck was rebuilt by assistant engineer Dave Ryall in 2007, he was assisted by Chief Engineer Bruce Slody and Assistant Chief Dennis Dittoe in rewiring the truck.

A new addition with four truck bays and two bathrooms was completed by contractor Herman Myers and dedicated in 1972.

Shortly after the addition, the Company purchased a 1967 International Van for a Rescue truck. Many tools were purchased and put into service, largely due to the efforts of Zeke Dill in his planning and remodeling of the van. This truck changed the Company’s thinking and provided a large ambulance training program to help the citizens of the community until a neighboring ambulance could arrive.

A new Saulsbury rescue truck replaced the International van in 1976. The truck had the much needed room for all of our heavy rescue equipment. The truck had a 9.2 cubic foot per minute compressor for breathing air, a 15 Kw generator, eight 500 watt quartz lights, a power saw, and various other rescue tools. Cost of this truck was $62,000. In March of 1979 we obtained a Hurst tool (Jaws of Life) totally funded by the Federal highway Administration for use at auto accidents.

A rescue boat was purchased in the early 1970’s after a drowning occurred at the Market Street Bridge.

In 1980, seeing the need for emergency care for our district, the Company purchased a used Chevrolet box ambulance from Harry Siegel at Tybouts Corner.  The ambulance had previously been owned by the Claymont Fire Company.  Due to age and condition of this ambulance, it was replaced by a Ford Yankee ambulance in 1983.

In 1990, the Company purchased its first custom engine.  Engine 49-1 was manufactured by Pierce, and has a 1,250 gallon pump, and carries 1,250 gallons of water.  It is powered by a 6V92 Detroit Diesel.  It has a self-contained pre-piped foam tank, and was the first engine to have 5 inch large diameter supply hose.

In 1992-1993, the engine room was expanded to its present size, and the interior of the first floor, along with parts of the second floor were remodeled, with a new dumbwaiter, new elevator, new meeting room, offices, and most of the downstairs was air conditioned.  This was accomplished at a price of $880,000.00, and was the first time the company had to borrow money since the start of Bingo.

In 1993, we replaced the second ambulance with another Ford Ambulance out of Horsham, PA.  It is still in service as A-49.

A second ambulance was added in 2003, and is a Horton body on a Chevrolet chassis. This Ambulance is in service as B-49.

With the restoration of the 1936 REO, the company purchased a ¾ ton Chevrolet pickup to pull the three-axle trailer that houses the REO.

Later that year, we took delivery of a new SVI Heavy Rescue, that replaced the Saulsbury Rescue.  The new Rescue is “state of the art”, with two preconnected Hurst Tool pumps and equipment, a 9,000 watt light tower, on-board air compressor, and a 40 kw power takeoff generator.

Our present equipment consists of three engines,  a pumper-tanker, a rescue truck, a brush truck, rescue boat, 2 ambulances, a utility truck, a suburban and a utility generator trailer.

Photo of the Day 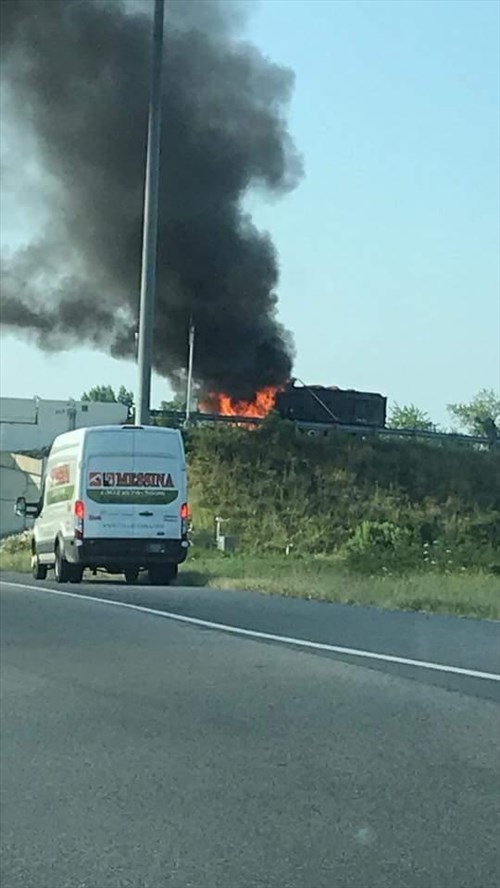